PeopleSoft Test Framework (PTF) is an enigma of sorts. At the Collaborate conference, in the Q&A session with PeopleSoft product strategy team, there was a show-of-hands  survey on PTF usage and the results of it was no surprise and it was consistent with the feedback and discussions from broader PeopleSoft community. 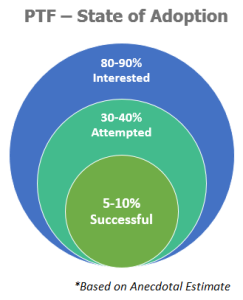 Why do many find it hard to be successful with PTF in the long run?

From the experience of deploying PTF and based on discussions with clients who have been successful and not so successful, I have discussed some critical factors on where customers struggle and more importantly how to overcome these factors and be successful with PTF.

Test Automation is a Marathon, NOT a sprint!

Most customers approach PTF deployment as a one-time Project, rather than an on-going Process. Meaning they lose both funds and focus after initial deployment. Test automation, regardless of the software used, is a long term endeavor and while it is resource intensive in short term, its ROI increases over time and end up saving lot more in the long run. So approach PTF based test automation as a phased activity over a longer duration executed in an agile way.

Whose job is it to automate testing?

PTF Tool is not everyone’s cup of tea. At most PeopleSoft sites, application testing is performed by Subject Matter Experts who understand business operations and application functionality, so these users are tasked with automating their manual tests with PTF tool. Here lies the problem, while “Recording” a PTF test by capturing user activity on the screen is a straight forward task, activities such as optimizing the tests for re-usability require technical know-how and familiarity with PeopleTools.

So tasking any one team with the entire responsibility of test automation is a recipe for failure. Building and maintaining a reliable and reusable PTF library requires engagement from resources with different skills,

While the benefits of test automation is reaped by business areas of the organization with lower cost and faster time to deploy changes, IT function within the organization plays a significant role in championing this transformation.

PTF has more than what meets the Eye!

PTF is a comprehensive tool with a rich set of features to build test scripts to address complex business requirements. It is critical for resources to get a structured training to understand the breadth of it capabilities, so that the tool can be put to best possible use.  In addition to the tool’s capabilities, there are various aspects of its usage that can only be gained from experienced practitioners.

THE most important reason that many PTF projects lose track and derail, is due to the lack of well defined expectations and standards for ongoing usage.

Expectations – Clearly defining the scope of “what is to be automated and to what extent” is critical to be successful with automation. PTF is best suited for ‘Regression Testing’ of the application functionalities used by a customer. So any change to the codeline due to customization or product updates can be easily validated for impacts on the overall system. While deep ‘Functional Testing’ can be achieved using PTF, maintaining such tests with ever-changing test data and business process variations may incur significant overhead.

For instance, Do you want create one PTF test to validate standard HIRE activity (OR) create 10 tests to validate different types of HIRE activity? Define this expectation upfront, so testers in each area follow the same approach. Recommendation is to first go broad and establish tests to cover all business functions, before going deep in any specific function.

Standards – PTF Test libraries are assets that evolve over a long time and involves multiple resources with different skills. So establishing the overarching governing Standards is key to maintain a test library that is uniform across the board. For instance,

These standards need to be established upfront and common test scripts created so that they can be reused in multiple tests, ensuring the standards are followed uniformly.

DIY (Doing It Yourself ) is NOT for Everyone!

Deploying PTF and establishing a sustainable test automation suite requires resource commitment across IT and Business functions of the organization. This may not be possible for every organization due to multitude of reasons relating to people, project, infrastructure constraints. In which case, it is best to engage the experts with proven ‘Testing as a Service’ offering that can manage end-to-end test automation using PTF, so that you can rest easy!

To conclude, before you leap into deploying PTF and experimenting with it, consider these critical success factors and prepare accordingly, so you give yourself a best chance to succeed.

Note: If you have deployed PTF and either have been happy or not so happy about it, please leave your thoughts so others can learn and adapt.